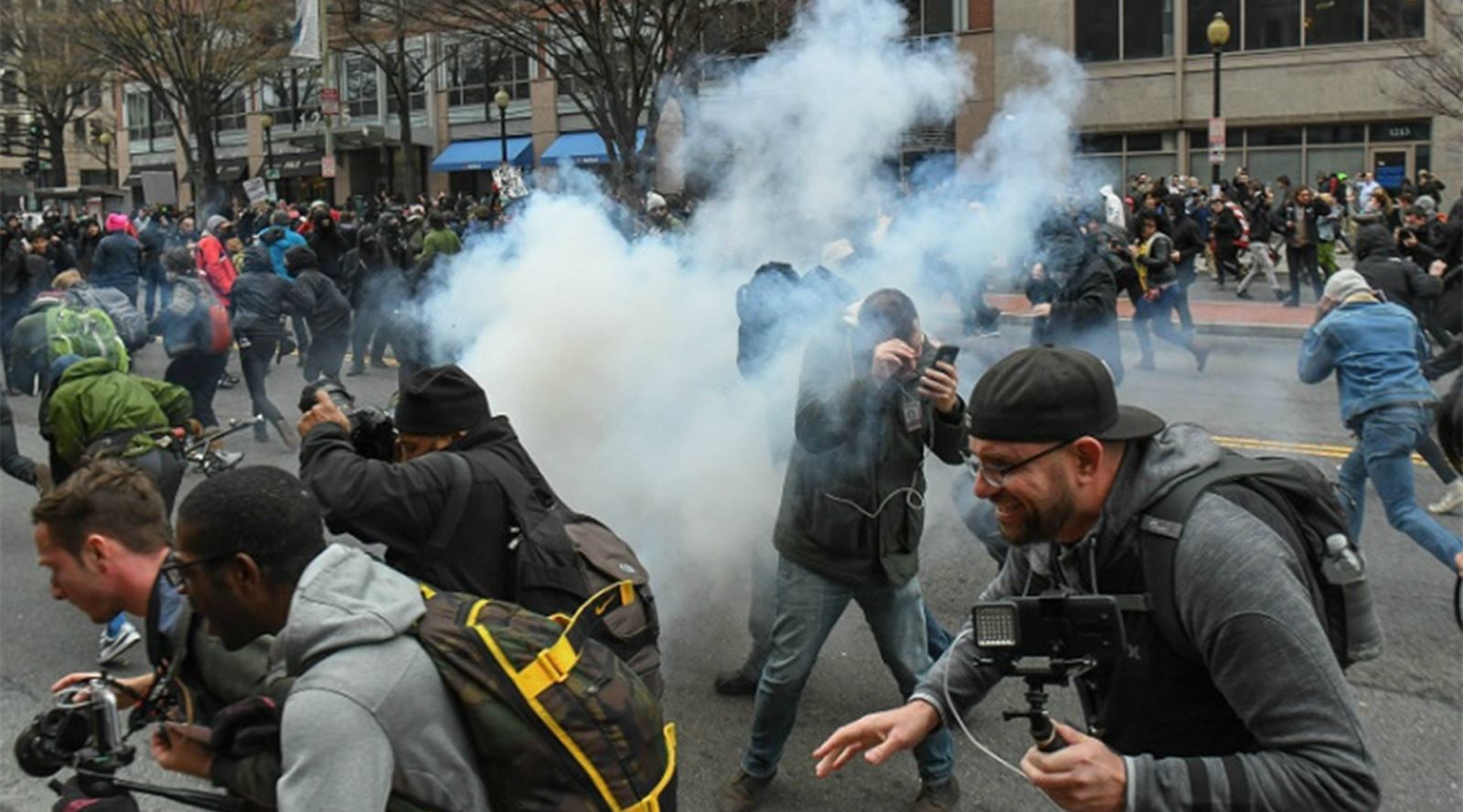 Shouting out for press freedom – and the Rory Peck Trust
by Tina Carr, Director, RPT

A photographer is taking pictures of a crowd. For no reason, he’s knocked to the ground and kicked by the police. Six journalists are covering an angry street demonstration when they’re arrested, detained and charged with felony. Three of these journalists are freelancers. All have been exactly where they should be on this day and all have been doing their job – it is, after all, the inauguration of the President of the United States.

Elsewhere, a photographer accused of crossing a border illegally is beaten and arrested; a cameraman films a policeman letting his dog loose on an asylum seeker. Menaced by the same dog, he’s forced to delete the tape. Journalists covering refugee camps and anti-refugee protests are detained, denied access, fined, and under attack. Where? Serbia, Hungary, Greece, Macedonia, France....

What’s going on here? We’ve been talking about freelancers under attack in repressive societies for years – but have we been smug? Is this the future for independent journalism in our own democracies? In the face of increasingly permissible intolerance in the West, our worst fears are being realised – and press freedom is struggling - under its biggest threat at a time when it is most needed.

There are many frontlines all with their own stories: war and conflict, human rights, environmental stories, local politics, national politics, corruption, organised crime. Freelance journalists are crucial to the telling of these stories. Brave, dedicated, professional, they are the backbone of a free press and operate at the sharp end of news. Like their corporate colleagues, many of them are being targeted and threatened – by governments, by factions, by gangsters – by anyone who doesn’t like what journalists do, anyone who wants to control the agenda.

The Rory Peck Trust works with and helps freelancers every day, and for them it’s very tough – and getting tougher. We provide practical support that helps them to continue working, remain safe, become resilient and keep their families together. This is what we do. Quiet work that supports independent journalists in a very real and effective way.

Many of you will have seen Meryl Streep’s shout out for press freedom at the Golden Globes recently. Well, we don't have a Meryl (yet), but if ever there was a time to shout out and support the work of your very own Rory Peck Trust, it's now!

The Trust has spent its entire life – more than 21 years – supporting freelance journalists who others try to silence – THIS IS NO TIME TO STOP.  If you’re not already supporting our work, then now’s the time to begin. If you’re already a supporter, perhaps you can do a little more.

The great writer Samuel Beckett famously said, "Ever tried. Ever failed. No matter. Try again. Fail again. Fail better." Shocking to do this to you Sam, but the world is going a little crazier than usual, so please forgive me: Ever given? Ever not given? No matter. Give. Give again. Give better.

The Rory Peck Trust will continue to give freelance journalists the support they need and deserve way, way into this oh-so uncertain future. Come join us.

You can donate to the Trust here.
Find out more about the Freelance Assistance Programme.
Visit the RPT online resources for freelancers.