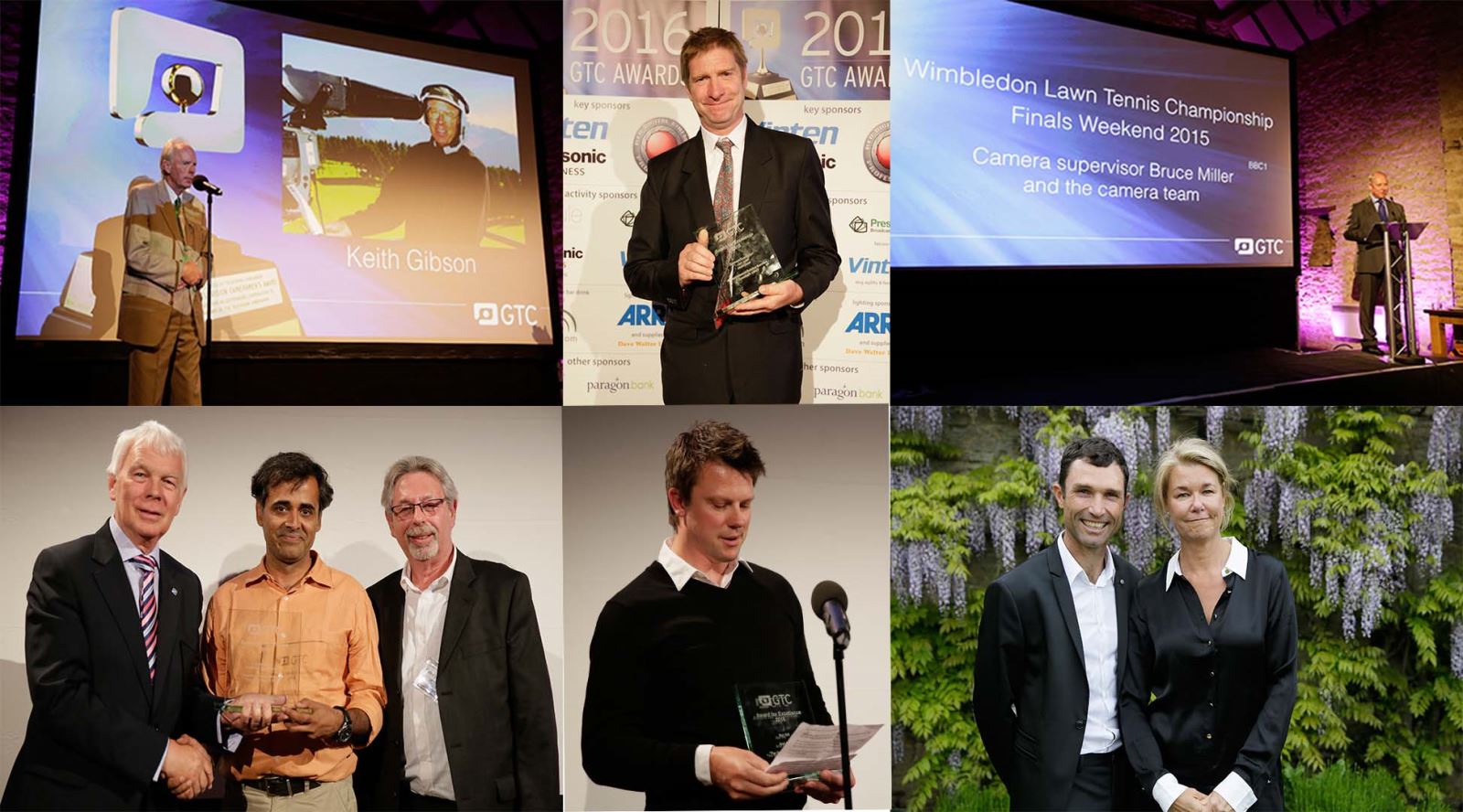 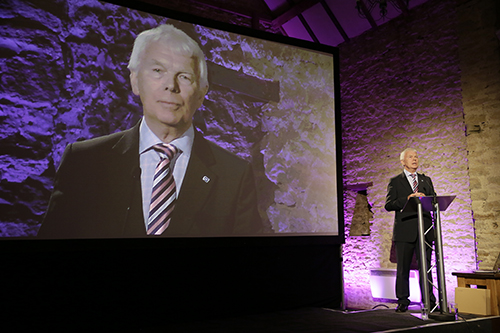 May at The Great Barn, A Day in the Country in Upper Aynho, Oxfordshire.

The evening started with an introduction by retiring GTC Chairman Dr Keith Massey, who reflected on his four-year term at the helm of the GTC as well as a long and fulfilling career as a cameraman.

Next, Honorary President John Henshall paid tribute to three very important people to the GTC who all sadly passed away during the past year: Founder Member and President Dick Hibberd; long-standing sponsor and friend of the GTC, Bill Vinten; and our European representative Richard van Nijnatten. 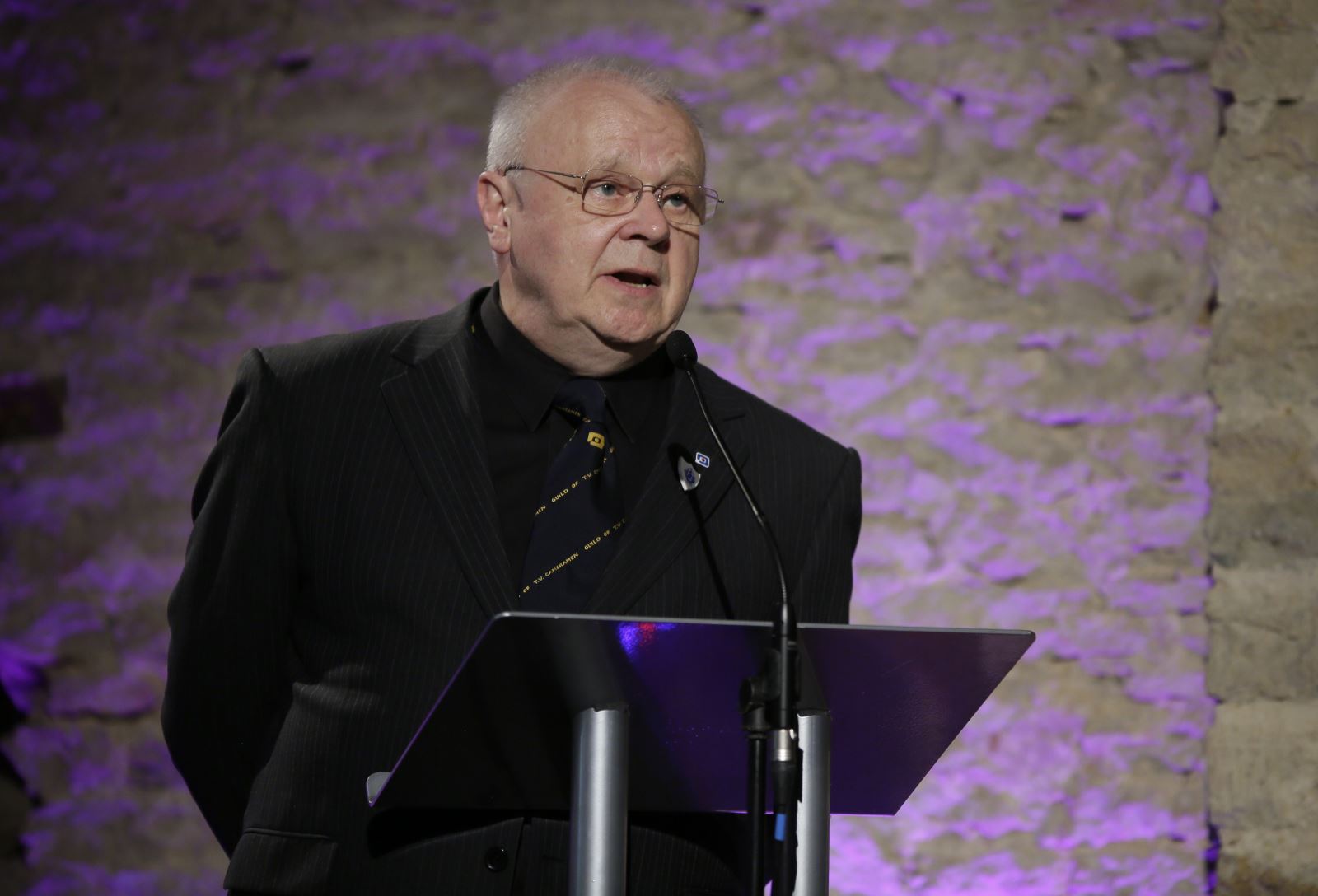 John had also uncovered some wonderful  footage, not viewed in 40 years – including the GTC's summary of IBC1974, featuring a demo of probably the most unwieldy portable camera you've ever seen; the very first use of Steadicam ever filmed; and the presentation of the first TiCA for 1974–75 to W.Vinten Ltd, which was collected by none other than Bill Vinten, along with Ted Gallione, inventor of the Fulmar ped. Bill Vinten was visibly touched and thanked the GTC for its recognition of a sector of the industry which he said often felt like "mechanical Cinderellas in an electonic world". This strong relationship continues today through the sponsorship of the GTC by Vinten, now part of the Vitec group, and indeed Vinten were major sponsors of the 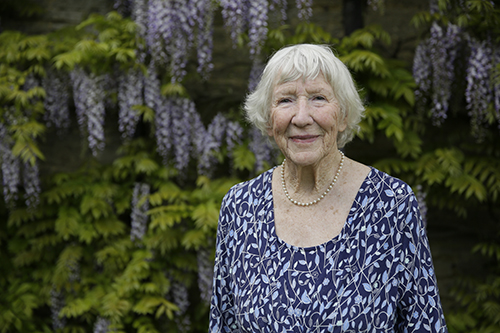 The keynote moved on to a presentation of Honorary Membership of the GTC to the "First Lady of the GTC", Dick Hibberd's widow Jean, who has done so much over more than 45 years to support Dick while he initiated, then built the GTC to the organisation it is today. The GTC was delighted that Jean was able to attend and to enjoy the event with all three of her children, Melanie, Steven and Richard. 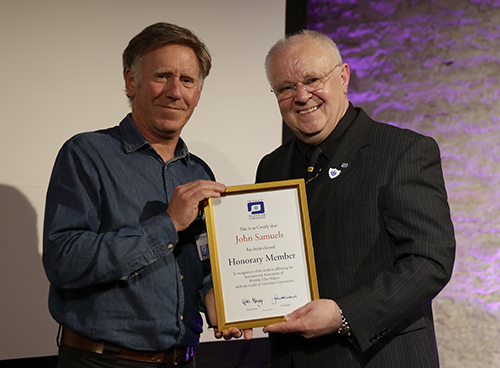 John Henshall concluded with presentation of Honorary Membership to GTC and International Asssociation of Wildlife Filmmakers (IAWF) member John Samuels, who initiated the idea of the recent amalgamation of the IAWF with the GTC.

Fellowship of the GTC was also presented to the retiring Chairman Keith Massey - a well-kept secret that Council had managed to hide from Keith.

GTC Awards Officer Chris Owen then took to the podium to announce the GTC Awards for Excellence and other Awards. 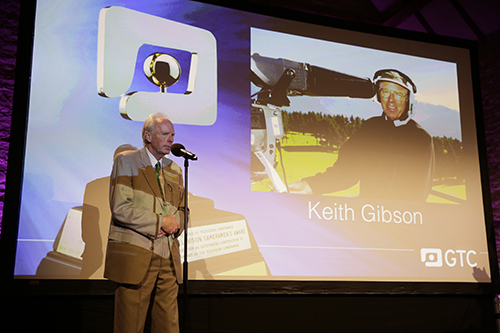 Jim Storey, Senior Director of European Golf Tour Productions, who has worked on golf for more than 25 years, much of this time with Camera Supervisor Keith as 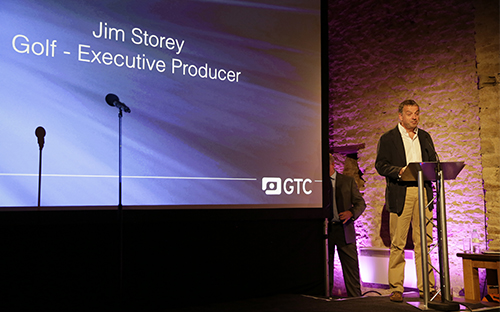 his "go-to" man, paid tribute to him. Jim explained that first and foremost Keith is a "lovely man, who you would always trust to lead by example, patient and unflustered." He added that he was one of the most honest people he'd ever known – with a strange fetish for silver flight cases! Keith is logistically brilliant, utterly reliable and great with younger guys, being always prepared to give advice.

As a cameraman Keith would never let you down - usually manning Camera 18 (the money shot) he could be absolutely relied on to always capture those all-important shots. Jim ended by wishing Keith a happy retirement and stating he was very proud to have worked with him. 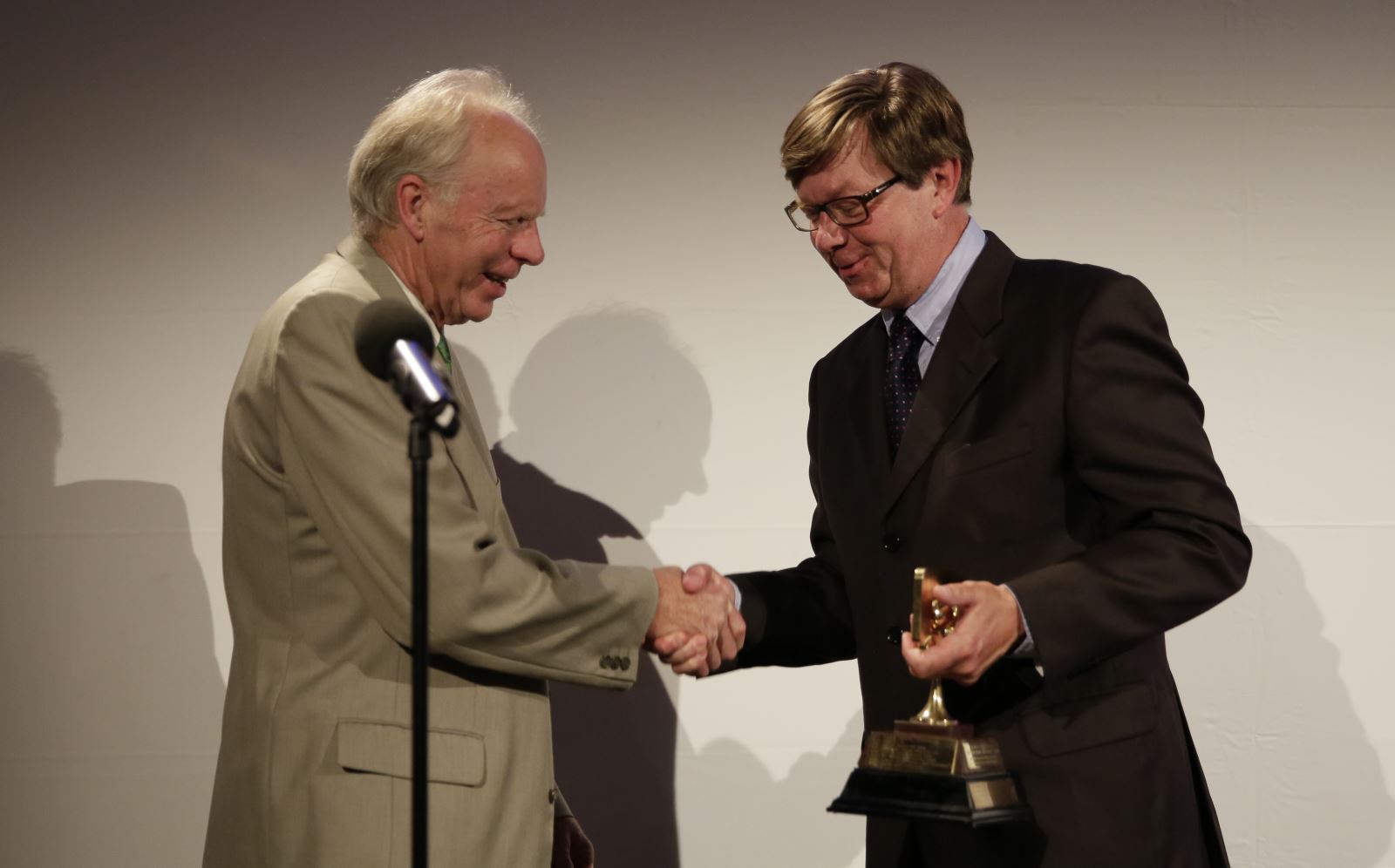 Thanking the GTC for the Award, Keith said he was delighted but surprised to receive it as he had always considered himself just a "jobbing cameraman". However Keith views his own career though, others fully appreciate that he has always done whatever he did superbly well - and for many years. The TiCA was presented to Keith by last year's winner Martin Hawkins. 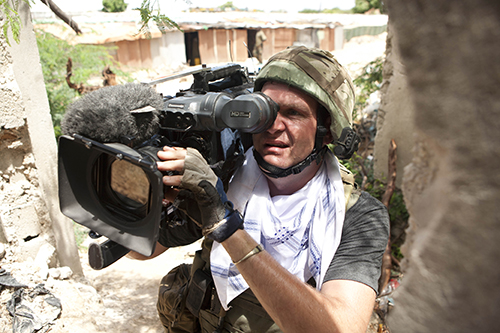 Jonathan Young is a true example of the core principle of the GTC “to foster and improve the art and craft of professional television camerawork”.

With his consistently high standards of work and professionalism, Jonathan has had a career that anyone entering the industry would aspire to. Reading his CV shows involvement in bringng to the screen a wealth of memorable factual programming ranging from accessible and quirky Louis Theroux documentaries to hard-hitting current affairs investigations reporting worldwide injustices. He has worked in over 100 countries including regularly travelling to some of the world’s most challenging and inhospitable environments. Jonathan has also led by example in actively seeking trainees and apprentices to work alongside him.

The GTC wanted to recognise Jonathan’s work that is helping sustain the role of the cameraman both through his exemplary camerawork and through the efforts he makes in training the next generation of camera crew.

Extreme World presenter Ross Kemp says: Jonathan Young is a consummate professional with boundless energy, even at the end of the day. He truly cares about people and is extremely cool under fire. I am very proud to call him my friend. 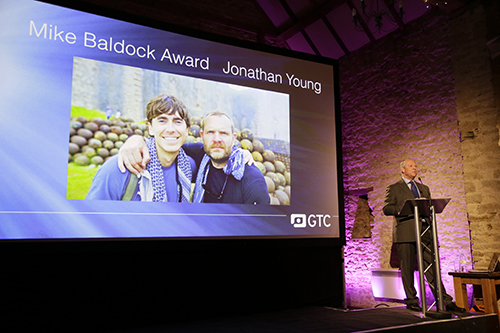 And BBC travel presenter Simon Reeve: I’ve worked with Jonathan Young for what seems like decades, and many of the trips we’ve been on together have been some of the most exciting and fulfilling journeys of my life. He’s brilliant at filming in 12 different styles during one day, magnificent at keeping kit working in extreme situations, sturdy company in tricky places, and a lovely bloke with an encyclopaedic mind.

On the night Jonathan was away filming in Siberia so the Award was picked up by Keith Massey who paid tribute to the Jonathan who he has known since he was a boy. 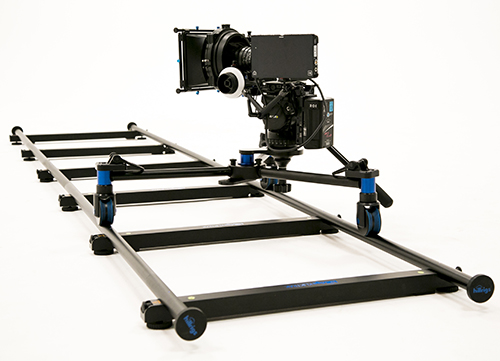 The GTC Seal of Approval was awarded to Hillrigs for their innovative, affordable and beautifully manufactured Kliktrak and Kombidolly system. Hillrigs MD Dave HIll, who lives in France, was unable to attend but sent his thanks, stating that the Award is a "huge feather in their cap and a pinnacle in the company's history".

Honorary Membership of the GTC was presented to John Samuels.

As well as the Fellowship for Keith Massey there were also 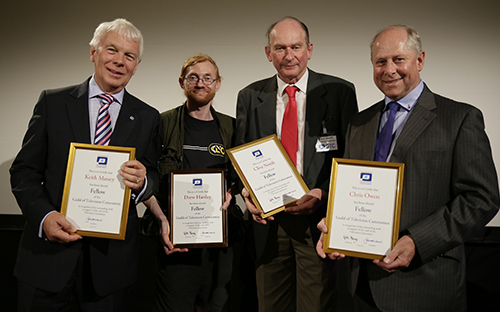 The funds from the day's Prize Raffle were presented to the industry charity the Cinema and Television Benevolent Fund (CTBF).

The GTC Awards are each year judged by a different panel of invited GTC members and colleagues. With the shortlist also consisting of nominations made by GTC members, the GTC Awards are truly recognised as an accolade from peers from within the camera department. This particularly valued aspect of the GTC Awards was mentioned by many of this year's recipients. 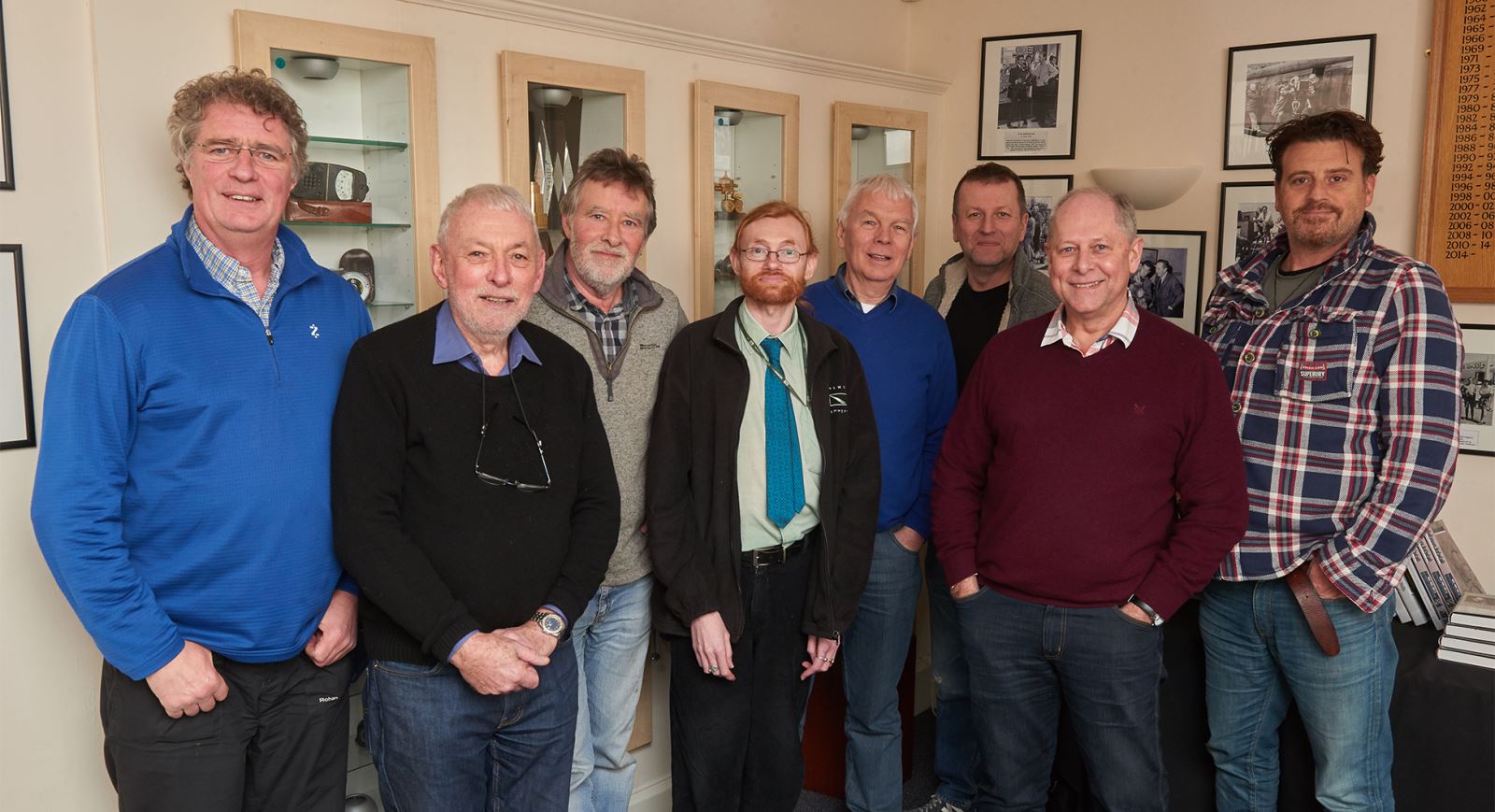