The University for the Creative Arts picked up the prestigious Bill Vinten GTC University Award at this year's presentation event, kindly hosted by last year's winning university, the University of York on Wednesday 22 October.

Bill Vinten presented the award to the Vice-Chancellor of the University for the Creative Arts, Dr Simon Ofield-Kerr, who said:
"It’s a great honour and a great prize. I’m proud of the staff team from the School of Film and Media who’ve made winning this award possible for our students." 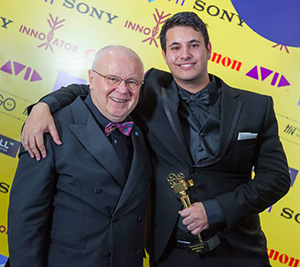 Vince Knight from Bournemouth University won the individual prize for his work on The Domestic Life of Mollusks. The judges said this was a "beautifully filmed drama with a variety of camera skills used to enhance the storyline" with "a style and pace that was hypnotic". They said the results were "absolutely astonishing". Vince will be taking work experience with the production team and crew on the BBC daytime drama Doctors.
Three of UCA’s student films were in the shortlisted six, scoring more points collectively for the camerawork than the other universities that entered. The runners-up, Daniel O’Flaherty and Thomas Read, are both from the University for the Creative Arts. Dan’s film, Sunday Dinner with the Morgans, mixed "a range of different movements into this one film seamlessly as each element fitted the storyline". One judge commented: "I can’t find anything to drag this film down". Tom’s work on Flypaper was "very mature and confident" with some "great handheld work" and some "fantastic underwater photography". Dan will also be gaining experience on the set of Doctors, while Tom will work with Lion Television in the New Year.

GTC Chairman, Keith Massey, hosted the award ceremony attended by GTC members, sponsors and representatives of the 11 competing universities. On hand to present the individual awards were judges GTC President Dick Hibberd, Karen Hall and Graham Reed. Judge Anna Carrington said: "The quality of student work this year was fantastic, all of those who entered should feel very proud of their work and what they have achieved."

Producer/director Gerry Troyna gave the keynote speech about starting in television as a sound recordist with Keith Massey before progressing to a variety of jobs learning the skills required for a career in broadcasting. Gerry has directed Panorama and wildlife programmes and spoke with admiration about the different qualities cameramen bring to a team and the different genres.

Some years ago Gerry was asked to make a pilot for a series that subsequently became Great Railway Journeys of the World. Given a choice for his next film in the series, Gerry chose to go to India and this started a love affair with the country. He spoke of his passion for documentaries and has returned to India many times to film in the sub-Continnet for with series such as Monsoon Railway, Indian Hill Railways and, most recently, Border Lines that will be completed this autumn.

Stuart Mckears, whose original idea led to the GTC University awards, also shared a few thoughts about the perceived decline in "creating pictures that are part of story telling". Stuart’s concerns also included the priority given to drama at university when more employment opportunities are in factual programming.

Students and staff from the University of York recorded the event and helped with the screening and organisation, led by lecturer Patrick Titley who explained: "It was a really useful exercise for the students – a great opportunity to work on a live event with all the pressure that involves."

The other shortlisted cameramen can be proud of their work too. Just three points separated third, fourth and fifth places. Tom McKie (The Last Fisherman, University of Lincoln), Jacob Leese (Scarlet, Staffordshire University) and Adam Grasso (SOS (for the artist Femme), UCA) missed out on the prizes but did excellent work – Tom on a trawler,  Jacob experimenting with ‘film noir’ and Adam in a music video making great use of smoke, slow motion and colourful images. All the shortlisted films can still be viewed on the GTC website.