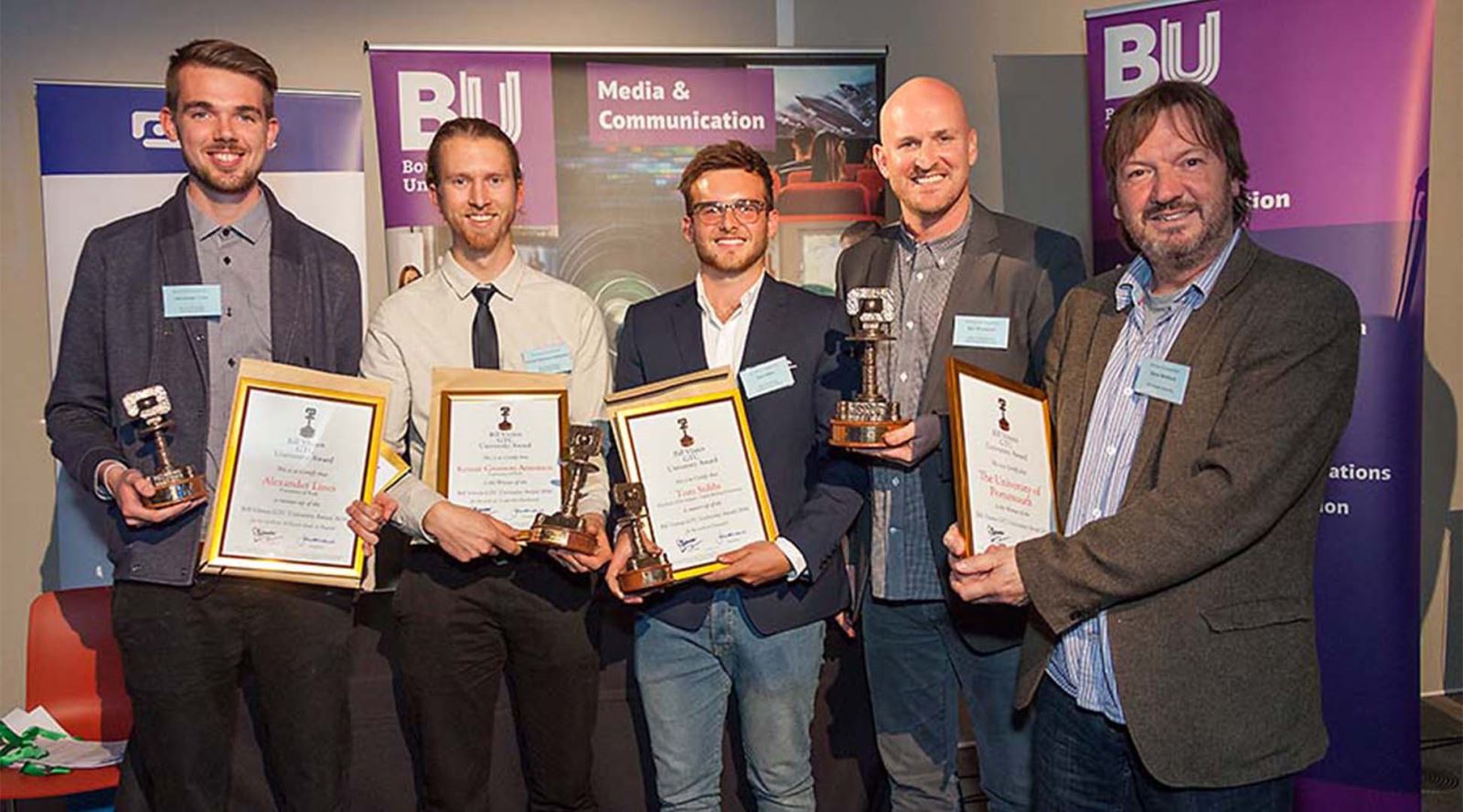 The fourth Bill Vinten GTC University Awards presentation event on Thursday 6 October was a chance to see some of the best films produced by this year's graduates from many cinematography and film and television courses across the UK. The event was generously sponsored by Vinten, a Vitec Group brand, in association with the Television and Video Camera Craft Educational Trust and kindly hosted by last year's winners, Bournemouth University. 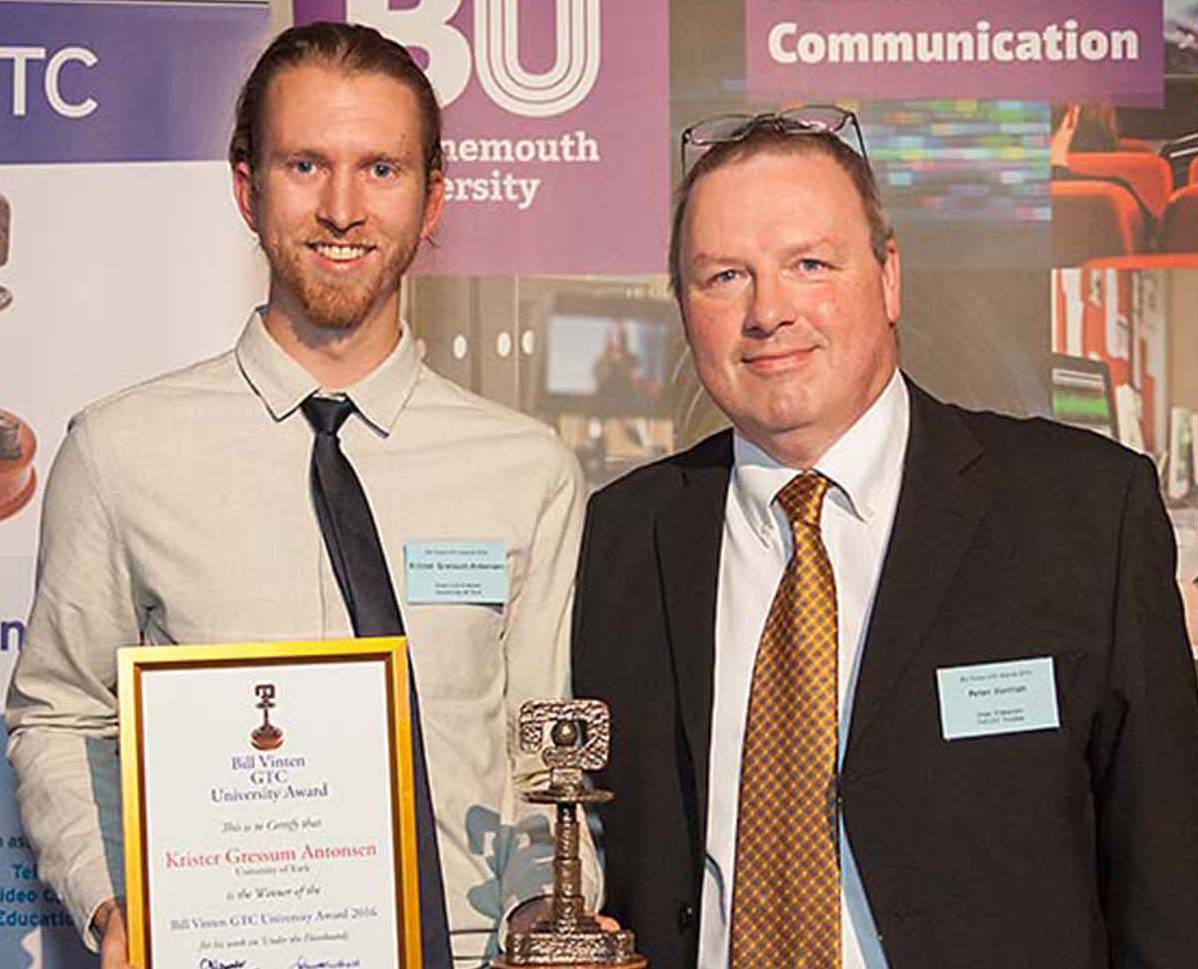 The winner was Krister Gressum Antonsen, University of York, for his work on the film Under the Floorboards. According to one judge, Krister’s work was "utterly professional at every level", while his craft skills were described as "mature", having a good mix of styles and demonstrating "very naturalistic camera moves".

One aim of these Awards is to encourage work from different genres and there was a greater variety of films submitted this year. When the judges' scores were combined, the next 15 entries were separated by just 16 points, an indication of the high quality of the camerawork submitted. The films included a further three documentaries, two music videos and a wildlife f 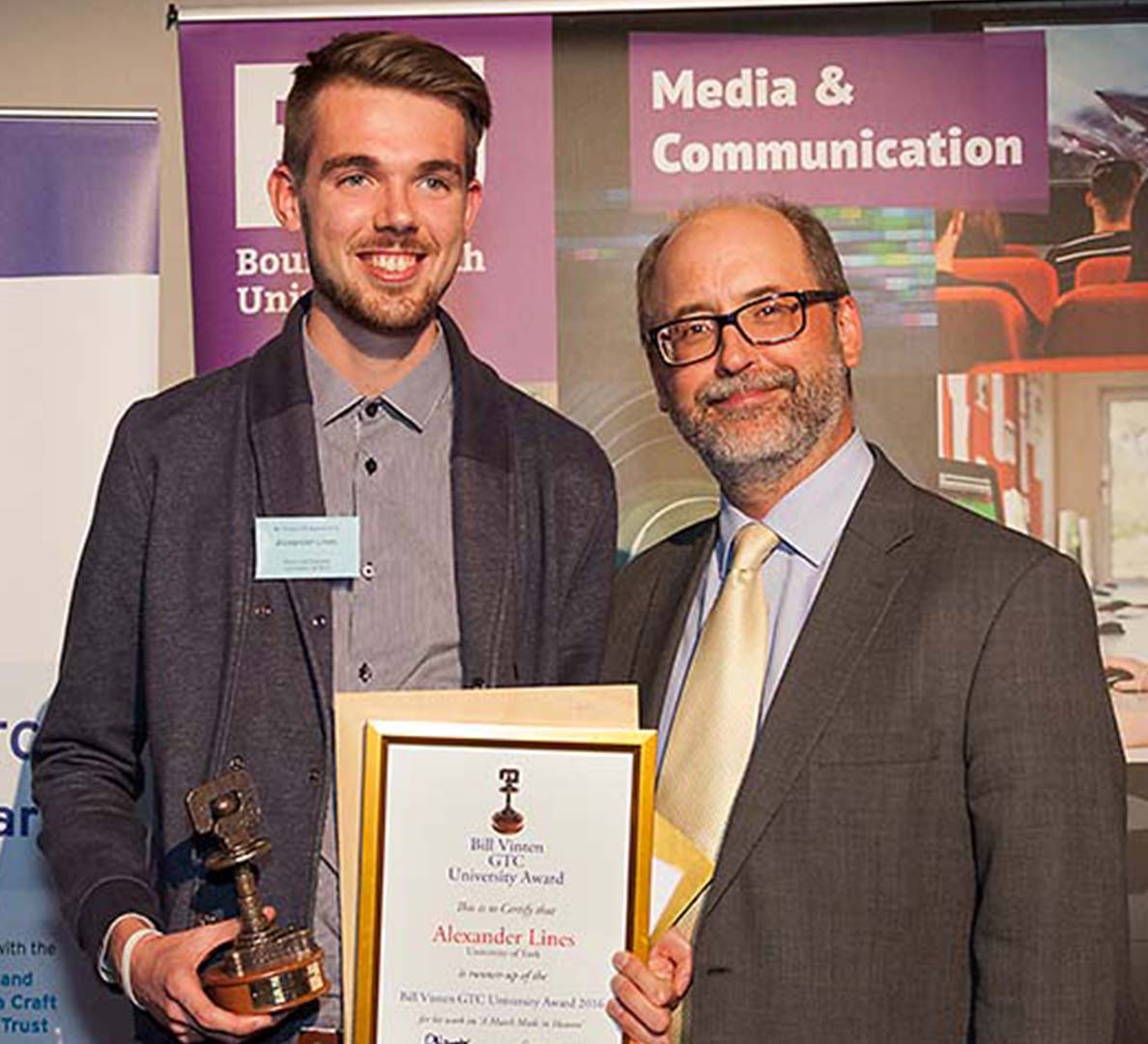 A documentary, A Match Made in Heaven, took second place for Alexander Lines, also from the University of York, for his camerawork that was praised for its framing, creative use of focus and tracking shots that fitted the subject matter well. 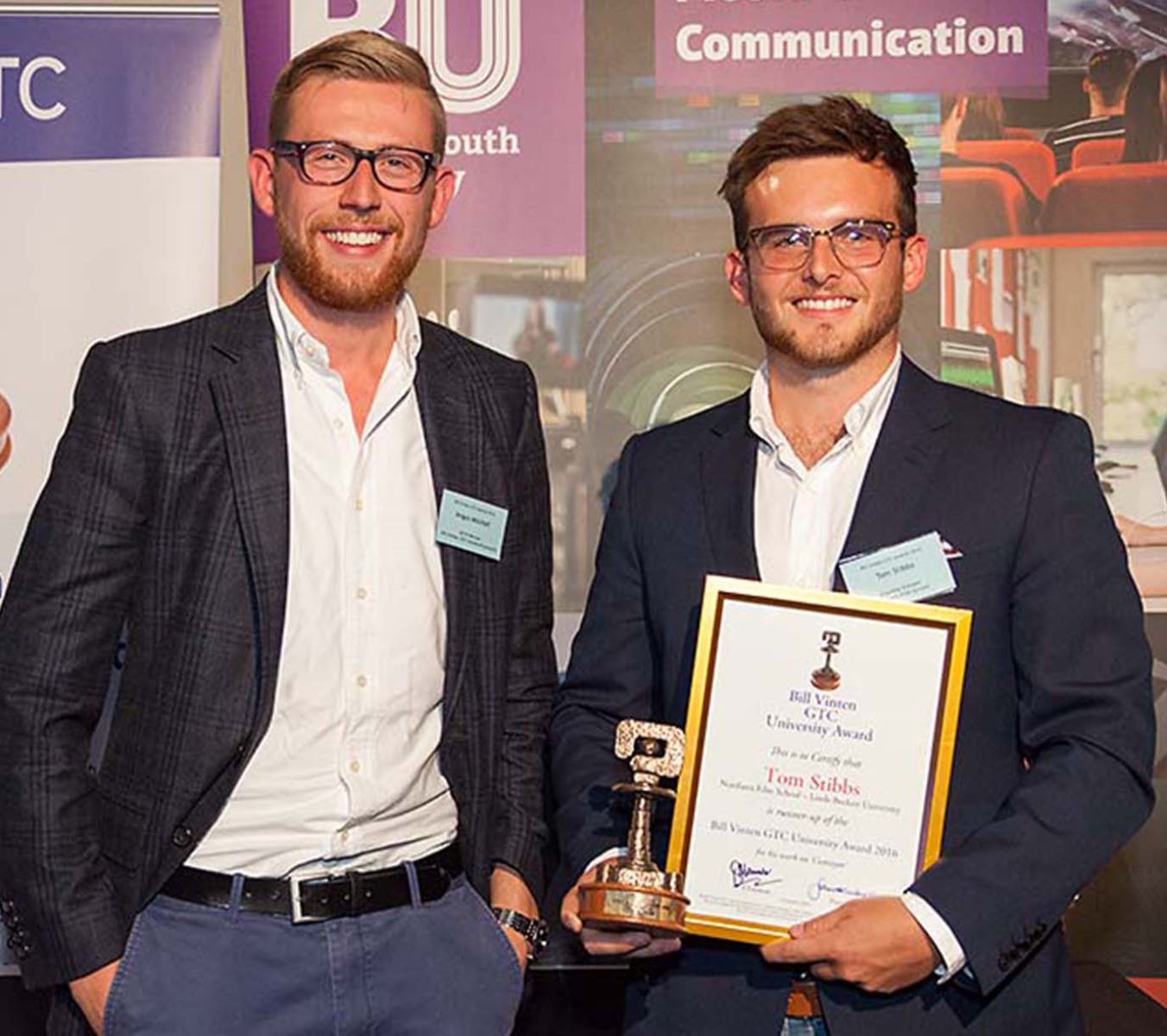 Beckett University, for the gentle film, Conveyor. Tom’s camerawork was described as "stylish, consistent and unobtrusive" and praised for the way it followed the action with camera moves, focus pulls and sympathetic framing.

The Bill Vinten GTC University Trophy is for the university with the highest combined score for three films from different genres. This year the honour went to the University of Portsmouth and was accepted by Ben Thompson, Section Lead in Film and Broadcasting. Runners-up were University for the Creative Arts and Bournemouth University. 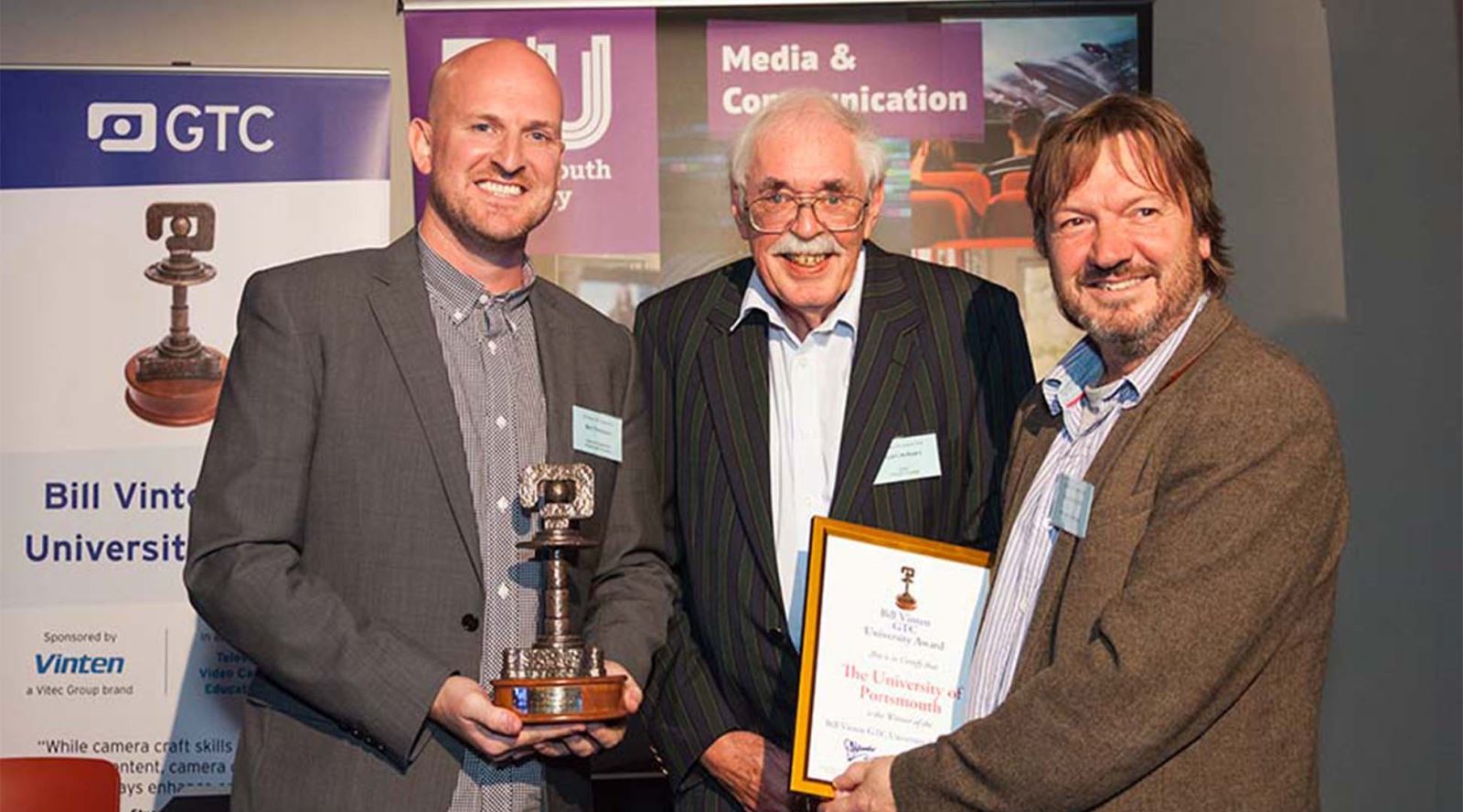 Entries for the competition are pre-selected by the university lecturers as representing some of the best student work and then the judging stage adds another level to the process of identifying especially talented graduates. 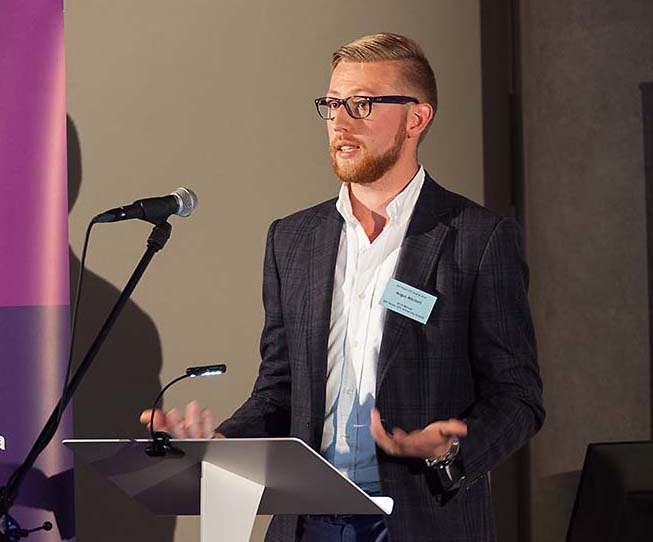 about his career since winning the Bill Vinten GTC University Award. Angus worked with GTC TiCA winner Martin Hawkins and the crew of ITV’s Broadchurch’. He then joined Sarah Putt Associates and Creative Skillset’s trainee programme, which led to a job as a camera trainee on the latest Star Wars film. And, as if working for Lucasfilm wasn't enough, Angus went on to do dailies on Steven Spielberg’s new film Ready Player One!

The Awards are held in high esteem by both the universities who recognise the value in highlighting craft skills, and Peter Harman, Head of Global Product and Sales Training for Vinten, who has been instrumental in supporting the GTC by funding the event this year. Peter was there to present one of the awards, along with the Executive Dean from Bournemouth University, Professor Michael Wilmore, and Stuart McKears, Chair of the Television and Video Camera Craft Educational Trust.

The keynote speech was made by GTC Chair, Graham Maunder. As a busy working cameraman, Graham had plenty of advice for the audience of students having just come out of a busy summer at Wimbledon, the Olympics and Paralympics. He also spoke about both the challenges and the rewards of his documentary work with Unicef and Comic Relief. 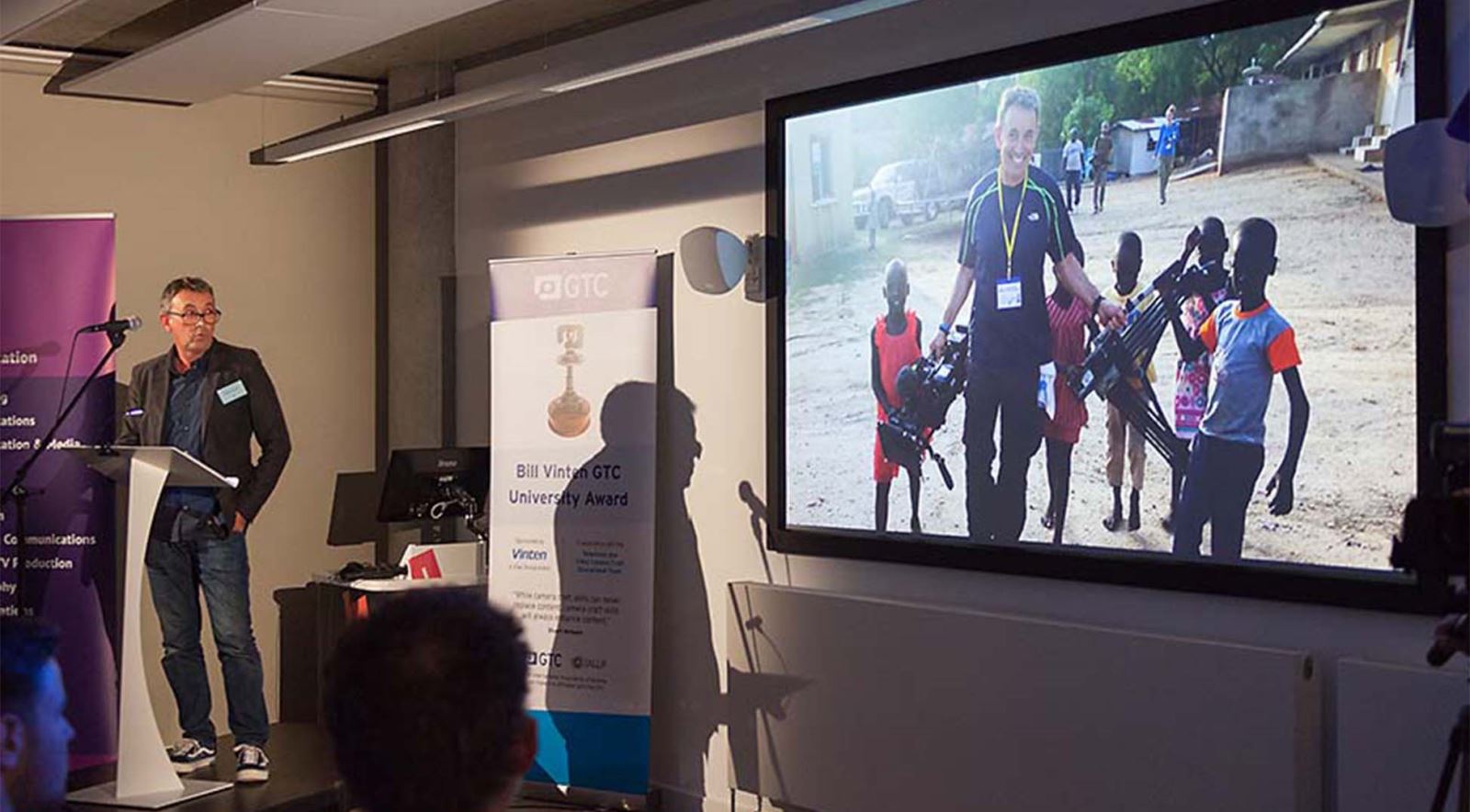 The prestigious Bill Vinten GTC University Trophy goes to the university with the highest scoring portfolio of films as long as they have adhered to the rule that submissions must be multi genre. This year's shortlisted universities were:

See much more about past winners and their valuable work experience elsewhere in the Bill Vinten GTC University Award archive.